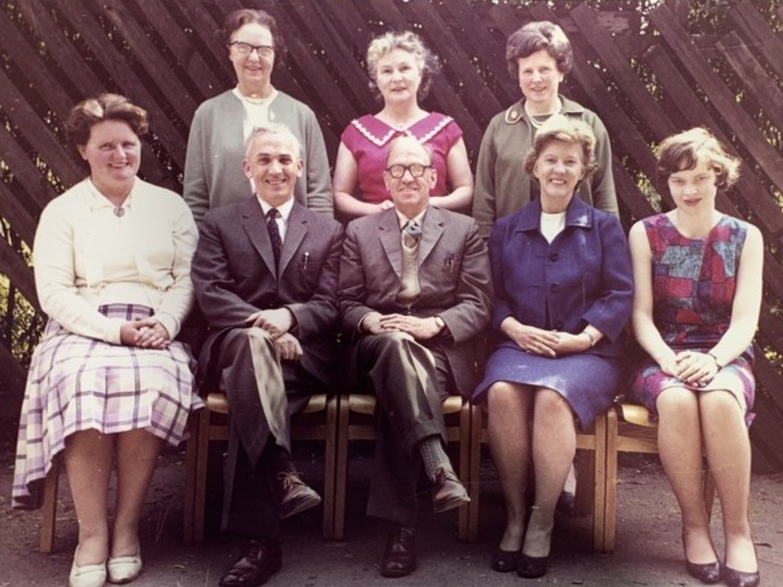 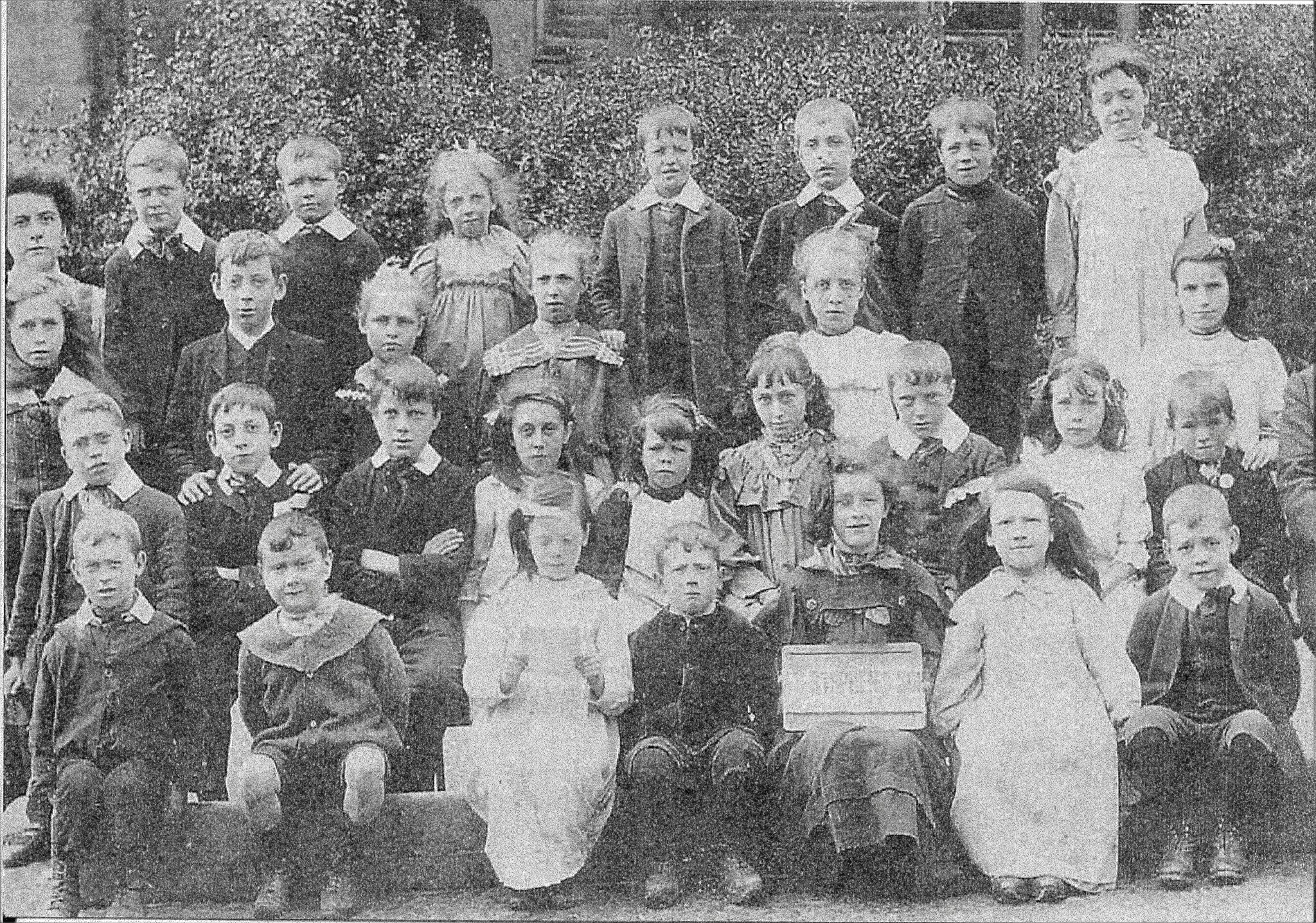 Here is an 1905 photo from St Stephen’s RC School, Skipton. I can only name two people. My Uncle Albert Hyde is 3rd from the R on the back row. His Sister Mary Lizzie Hyde is stood in front of him. Not very clear but may be of some use. Liz

END_OF_DOCUMENT_TOKEN_TO_BE_REPLACED

29th October 1880 Emily Smith and Frederick William Pratt left to go to Clifford.  Their father having got employment there.

12th November Scholars have been kept from school picking turnips.

18th November John Newton above 13 left to go to work.

7th February Arthur Haigh 14 years of age and William Henry Hargreaves above 13 years of age, both capable of passing the 4th standard, left to go to work.

10th March Edith Demain, being over age and well advanced, left for work.

31st March Hannah E Bulmer and Annie Snowden both left, could pass the 4th standard and of age.

9th March James and Bertha Bulman have left the place and gone to Rothwell.  Lila Demain absent the whole week.

13th April A R Gill on a visit to her grandmother and M A Haigh absent.

15th June Tyers children gone to Shadwell having disagreed with the next door neighbours children.

12th October 32 scholars on the register, attendance 17, the corn not yet in.  Lila Demain and Ann Crowther left school , over age.  Emily Hargreaves died with Scarlet Fever 30th September 1883.  9 absent in consequence of fever.

16th June 3 Haighs absent for fear of the fever – so they say.

18th September The death of Mr Reeves during the holiday the school was conducted by Miss Reeves until Christmas 1884.

9th January I, Henry Noble———- took charge of the school from 5th January with 27 children attending.

24th April Mrs Wade of Beech Grove sent to see if we could take a boy into school and board him.

8th May The School Attendance Officer called on Wednesday and paid for Widow Marston’s three children at 1/4d per attendance.

19th June Asked Mr T E Wade, Forshort House, the Churchwarden & Surveyor of Highways if he would call to verify the registers.

29th April Louisa Netttleton admitted on Monday 25th April.  She is 7 years old but does not know her alphabet never having been to school before.

6th May The Shadwell children are very irregular as are the Hargraves.  Herbert and Ernest Wells, twin boys , admitted this week.  They are only 3 years old.

20th May Phoebe Horner has been away sick all week.

10th June Isabel and Alice Hargrave only present three times this week.   These girls are most irregular.

8th July Matthew Garbutt away from home on a visit to stay until after Harvest.

15th July There is a gradual falling off in attendance, which will most likely continue until after harvest, some children are still at work in the hayfields.

22nd July Elizabeth Garbutt away on a visit for some weeks.  Attendance irregular and poor.  Some of the children are picking fruit.

2nd September Sydney Smith 11 years old admitted on Monday.  Arthur Barker left on Wednesday.  Gone to live in Harrogate.  Matthew Garbutt still away on a visit.  Been away since 1st July.

16th September Charles Hargrave only made 2 attendances this week.

23rd September George Henry Woodham admitted on Monday.  Matthew Hargrave came back to school on Wednesday, having been away 3 months.

14th October Thomas Robinson sent to school  came a little way and turned back home, so was punished the next day, having done the same thing several times before, his mother not caring about it.

28th October Albert Smith present only twice this week and twice the week before.  He attends very irregularly.

18th November John Allanson unable to attend having been bitten by a dog on Sunday.

4th May John and Wm. Henry Smart have left the school.  Having gone to live at Moortown.

8th June Allansons attend very irregularly, two being away all this week and two last week.

15th June One girl Emily Green admitted on Tuesday and is working in standard 2, has been away from school for some time with bad eyes, not yet able to keep at work all the time.

7th September Two little children from Slade Hill admitted, they have been very troublesome all the week, apparently never under control.

14th September Matthew and Elizabeth Garbutt away on a visit and Maud, Florence and Charles Foster have left the school and neighbourhood.

9th November George Alfred Standage admitted on Tuesday, is 6 years old and not been to school before.

22nd February Arthur Allanson first week since before Christmas.  This boy has only made 81 attendances during the past year.

5th April John Allanson has left the school to work at Mrs West’s.  Alice Stoke also left, her parents having left the neighbourhood.

19th April Alice Hargrave has been absent since the examination.

24th May Lately Sydney Smith has been working all the week.

7th June George Standage is lame and unable to attend.  Dora Harrington leaves school this week, her parents going to live in Lincolnshire.

21st June Annie and Alice Wood admitted.  The former knows nothing about notation and the latter has not been to school before.

28th June Nettletons not present until Thursday.  Alice and Jane Brown gone to the new Board School at Moor Allerton.  Ellen Goodall admitted, is nine years old and can neither read or write.

19th July The attendance decreases as the hot weather continues, ten children away all the week picking fruit in the market gardens.

2nd August Attendance about the same as last week, children still picking fruit.  This being the best time for helping their parents during the year.

26th August Alfred Horner going to harvest on Tuesday and present no more this week.  Alice Hargrave present on Monday afternoon, not having been to school the last six weeks it was open.

6th September Alice Hargrave away again.  There is always some excuse for this child’s non- attendance.  I can  never get her to school many weeks in succession.

27th September Albert Smith never been present since before Harvest, only made ten attendances during last quarter.  Beatrice Smith present the first week last quarter only and Alice Hargrave present only 9 times in the quarter.  Always some excuse for non-attendance.

25th October The continual rainy weather affects the school very much, Nettletons not being able to get to school since Tuesday last week.   Powells left the school having removed to a greater distance.

14th February Annie Wood has only attended once all week.

21st February George Standage has left the school, having gone to live in Leeds.  The two Smiths have been away since before Christmas, having left Alwoodley and are living in Moortown, still saying they should keep their attendance here until after the examination but have failed to do so.

28th February Phoebe Horner has been poorly all the week and Annie Wood since Tuesday.

7th November Mary and Robert Robinson’s name removed from the register, they have moved to Chapeltown.

13th November Mrs Nettleton from Shadwell came to school this morning and was very disagreeable because her children were sent out to play after they had finished dinner yesterday.  She said she would take them away.

18th November Attendance very good, the Nettletons were among the numbers, their mother must have reconsidered the matter.

20th November Annie attended only once this week.  She has only attended 28 times this quarter.

3rd April Very irregular attendance, little or no progress can be made, Goodall and the two Youngs especially.

15th June Admitted Annie Young, aged between 6 & 7, not been to school before.

8th July Admitted two boys George & Stephen Tiplady who have been attending the Moortown Board School.

10th July The Duthoits have only been twice this week.

14th September Admitted three boys by the name of Bailey.

21st September School closed for a week in consequence of the death of Mr Healey, the husband of the schoolmistress.

2nd October Harry Carr’s name taken off the register, his parents have left the neighbourhood.

9th October The conduct of George Tiplady being so bad in school the vicar advised me to expel him.  I understand he was turned out of Moortown Board School and also Meanwood.

23rd October I understand that Wm. Fletcher and the two Goodall’s have gone back to their own school, Shadwell.

26th October George H Young has attended 11 times out of a possible 50 and his sister Sarah J Young 10 times.

20th November Tom Robinson has gone to work, he has only passed standard 3 and is twelve years old.  Two children by the name of Wray have been absent four weeks.  I understand that three children named Young have gone back to Shadwell school.

27th November It is now three months since the school fees were abolished in this school, the average has reached 14.6.

11th December Nettletons have been one day.  It is impossible to teach them anything.

18th December Nettletons have made two attendances this week.

11th January Arthur & Charles Coney have gone away and may not come back again.  Stephen Tiplady is sick.

29th January The names of four children removed from the register, Coneys who have left this place and the Nettletons from Shadwell.  Numbers now 12.

2nd February All the children from Shadwell have now left.  John W Craven is a very poor reader.

8th February A family of six admitted (Happs).  I scarcely know how to classify them – they seem to do their own work so badly.  Annie Wood is very careless in arithmetic.

Note: It appears that entries of names of children still at the school but admitted in from previous register have been included.

Any cookies that may not be particularly necessary for the website to function and is used specifically to collect user personal data via analytics, ads, other embedded contents are termed as non-necessary cookies. It is mandatory to procure user consent prior to running these cookies on your website.