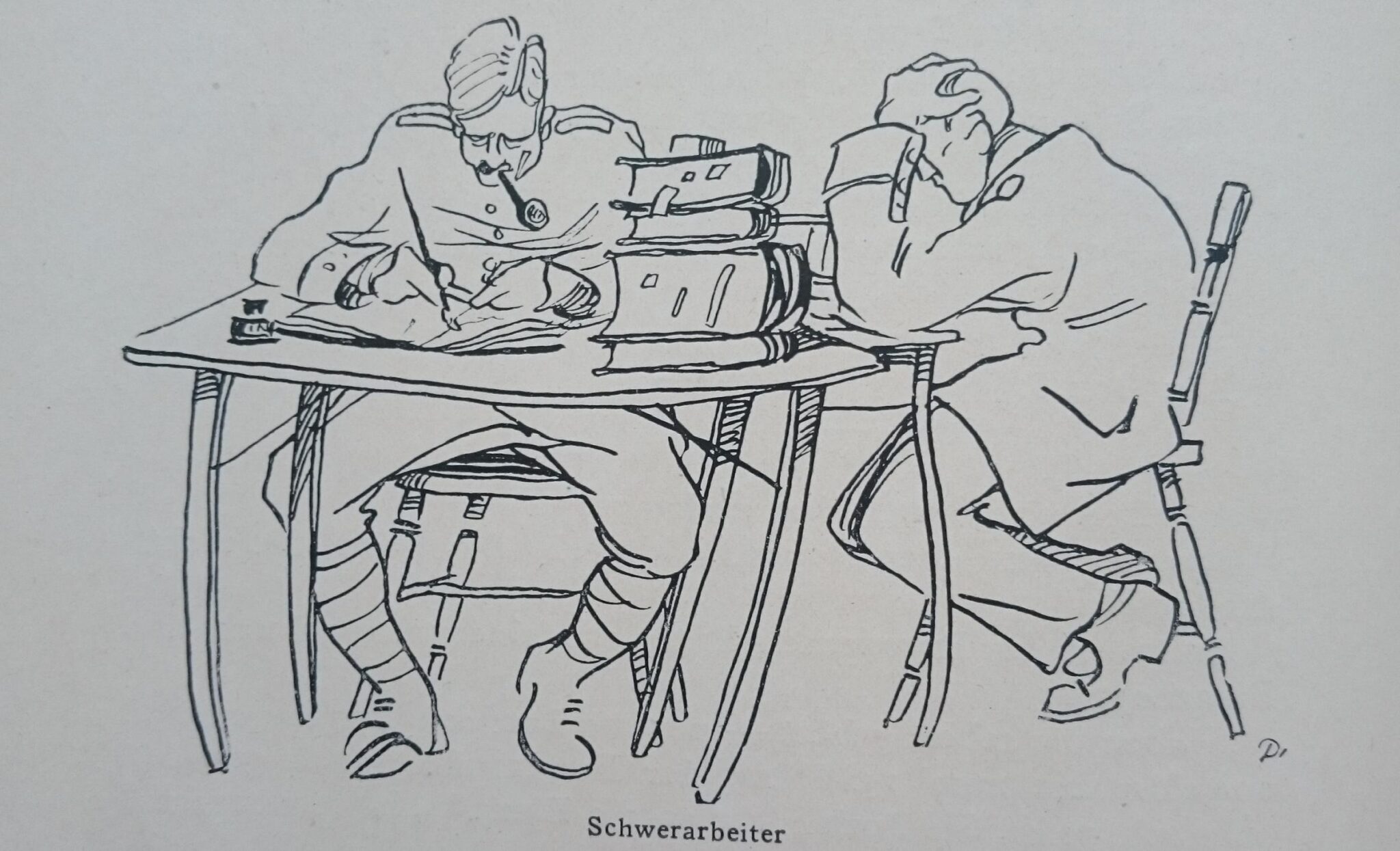 Originally a training camp for Bradford Pals and other Regiments (January 1916). Huts were given names like “Buckingham Palace” and “One Step Nearer”, pathways were given familiar names like “Downing Street” and some were given derogatory names. The camp was built to hold 1200 people. When it later changed to a Prisoner of War Camp, at its height, it held 564 officers and 137 orderlies (686 Prisoners of War); total number of admissions was 989.

Alan gave thanks to Rob Freeman who created and provided animation for the talk. So special was the Skipton camp that some of the prisoners wrote a book of their memoirs ‘Kriegsgefangen in Skipton. 60 different officers contributed, illustrated by Doppelhopf. A copy of the book is available online. It is currently being translation by Leeds University.

Alan showed a map of the camp, which was surrounded by a double row of barbed wire. British guards lived outside the camp. The plan showed a theatre, library, vegetable garden, showers rooms, barbers, a tailor and a cobbler. They had all the comforts of home.

A 1907 map of Skipton, showing Raikes Wood. A current map showed a housing estate now occupies the site (off Raikes road). Germans in their memoires detailed how huts were constructed on concrete bases. These drawing were later used during an Archaeological dig to locate the huts.

The German Officers who occupied the camps were young men, with an average age 26-28 years. They were always optimistic that they would win the way. When they finally left, they decided “Together let’s go build the Father land”.

Activates on the camp included a Choir, an Orchestra (which even performed at the local Catholic Church) and a theatre group, which held weekly productions. They had an education System, as a small number were of 6th form age and hadn’t finished their education. This allowed them to study and complete A levels. Everything was properly endorsed and allowed them to gain recognised qualifications. Other activities included sports and exercise, which even allowed visiting the local football ground, if they promised to return.

Alan displayed a number of photographs of the camp throughout his talk. Very few have survived, but a number taken by George Crowther, who at the time was a photographer for the Keighley News, were kindly supplied by Ian Dewhirst.

Spanish Flu, arrived in 1918-1919 and a large number died from it, including 47 died from the camp. 5 prisoners died in the actual camp, the rest at Keighley war hospital. Their names being recorded in the Keighley Hospital register which is now held at the Keighley Library.

Germans later paid for a memorial for those who died. It was one of the 1st War Memorial to be constructed in Keighley. The German victims of the flu were buried at Morton Cemetery, just inside the main entrance. There coffins being stacked five high to maximise space. However, they were later exhumed.

In 1936 the Hindenburg flew down the Aire Valley and whilst over Keighley, the brother of one of the victims, dropped a letter, bunch of flowers and a silver cross. The letter requested that the flowers and cross be placed upon his brothers grave. Two boys’ scouts abided by his request.

Alan went on to explain how he traced some of the prisoners from the camp and how the treatment of one particular prisoner may have saved the lives of countless people in the 2nd World War. Karl Plagge – the Nazi who saved Jews ‘The Good Nazi’.

Alan took us on a tour of the World, including the prisoner’s backgrounds; ranging from U-boat captains to airmen.

Unfortunately, a large number of Prisoner of War lists were destroyed in 1940 bombing raids, in which the National Archives in London was hit. However, through extensive research Alan has managed to piece together a large proportion of the puzzle. Alan has provided a plethora of information to the ‘Craven Herald’ and the ‘Keighley News’ which together with his name ‘Alan Roberts’ you can Google. The story is continually unfolding which I am sure he will tell us about on his next visit.

Alan is willing to accept enquiries via email.